Australian Property Investor magazine (API) consulted with industry experts to come up with a list of the top 100 suburbs primed for growth. They published this "Hot 100" in their September 2010 issue. This page compares the performance of the API top 100 against the DSR top 100 for the same period.

There is about a 2 month gap between the receipt of top picks by the magazine from experts and the date the magazines are published. The magazine's issue month is also in advance of this date by one more month. So the data appearing in the issue called "September" would have been provided in June.

In comparison, the top 100 property markets in June 2010 as ranked using the DSR had an average growth for the same period of 18.61%. That's over 4% more capital growth than the average expert's pick.


How the race unfolded

Median calculations jump up and down a bit from month to month. Sometimes this is from volatility, other times from statistical anomaly.

So publications of performance results are often timed carefully to coincide with a positive month for the predictor. Not here at DSR data. You can see the entire race in the following chart. 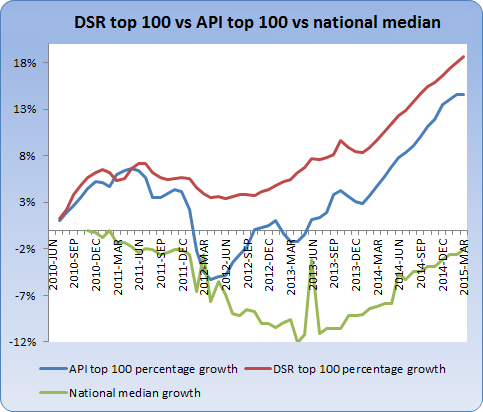 Note that the entire country's real estate market was not having a good time over 2011 and 2012. Some markets had major losses and other market losses were not so severe.

The top ten by DSR, as opposed to the top hundred, had an average growth slightly higher of 18.93%. That's over 4% more capital growth than the average expert's pick.


Putting it in context


But you can do better

In compiling the top 100 by DSR, no research was performed to refine the list any further. This list was pulled straight out of the database, ordered by DSR from highest to lowest. That means an investor could grab the top 10 by DSR, perform more research to refine the list further, and get even better returns.

Also, note that this is the top markets by basic DSR, not by DSR+ which outperforms the basic DSR. That means an investor could grab the top 10 by DSR+ and refine the list to get even better growth.

You can verify the results of the API top 100 by obtaining issue 115 dated September 2010. You'll need to obtain historical price data for these suburbs for June 2010 and for the time of writing, April 2015.

The top 100 DSR markets were published in the same issue of API mag and appear on page 127. You'll need historical price data for these property markets for June 2010 and for the time of writing, April 2015.